FOR THE INFORMATION OF PRESS AND GENERAL PUBLIC

FOR THE INFORMATION OF PRESS AND GENERAL PUBLIC

The draft stipulating to make amendments in various laws which was postponed for two weeks to come to Parliament’s agenda titled as “Homeland Security Package” by public; due to the heavy damages in society it may entail has been discussed widely in the country’s agenda and causes reactions in a large part of the society.

With the enactment of the mentioned draft; the most basic democratic rights starting from right to live, carrying out political activities, rights of meeting and demonstration which are indispensable for a democratic society and even rights of all kind of celebrations and protests will be under the threat with severe punishment. Despite all bitter experiences our society have, trying to ensure “public order” by hands of governors and security forces endowed with judicial powers, exhibits the problematic understanding of authorities  estranged to the social reality.

With Enactment of the Draft, Fundamental Rights and Freedoms Including Right to Life are Threatened.

With above mentioned draft, police is empowered with carrying out searches without seeking for judges and prosecutors’ orders, police officers are given authority of detaining and arresting, likewise police officers are given authority for wiretapping without judicial supervision, deciding about a meeting or demonstration whether it is legitimate, authority to intervene is therefore given to the discretion of the police.

Using painted water, which is undisputedly cause negative and lasting effects on human health, to suppress meetings and demonstrations is legitimated. Usage of materials like scarves to cover the face for avoiding from gas and painted water is also provides ground to severe punishments even when the face is partly covered.  With this draft, the use of individual and public rights is subjected to the threat of severe punishment and by increasing the amount of penalties, possibility of postponement of penalties is abolished.

With the enactment of this regulation, orders issued by administrative action of governors will have almost a judicial nature and people who fail to comply with these decisions may be sentenced and the municipalities that do not submit their vehicles to Governor’s order to be used for suppressing demonstrations may face confiscation of their vehicles by police.

Above and beyond all of these drawbacks, warranting police to use real weapons to a large extent without limiting by any objective criteria, people’s  right to life is taken under threat

Legal Assurance for Police Officers’ Crimes is on the Way

With the enactment of this regulation, an almost judicial guarantee is given to the police in cases of undue violence and homicides for which perpetrators have already been getting away free due to the reluctant approach of authorities and judges.

Society is in Expectation of Legislation to Fight Against Impunity

Despite the fact that police officers go without punishment in the trials brought against them due to public pressure, for their acts against citizens involving disproportionate use of violence and intentional acts; instead of limiting the authority of police in the use of force under PVSK (Polis Vazife ve Selahiyetleri Kanunu - Police Powers and Duties Act) giving more power to the police is unacceptable.

The cost of designing the judiciary system and police force according to daily political needs and objectives of ruling political power instead of designing them in accord with the community’s expectations and democratic values will be paid heavily by society.

Despite all bitter experiences proving public order cannot be provided and maintained by police measures; restricting fundamental rights and freedoms with security approach will cause a distrust in relations between the state and society

Public order can only be provided by an independent and objective judiciary and with respect to the basic human rights in administrative practices as well as by fighting against crime and criminals through democratic measures.

We, signatories as East, Southeast Region and Ankara Lawyers’ Bar Associations, are calling on the ruling party to listen the objections and oppositions of other political parties in the Grand Assembly and NGOs by withdrawing the draft from the Parliament as soon as possible 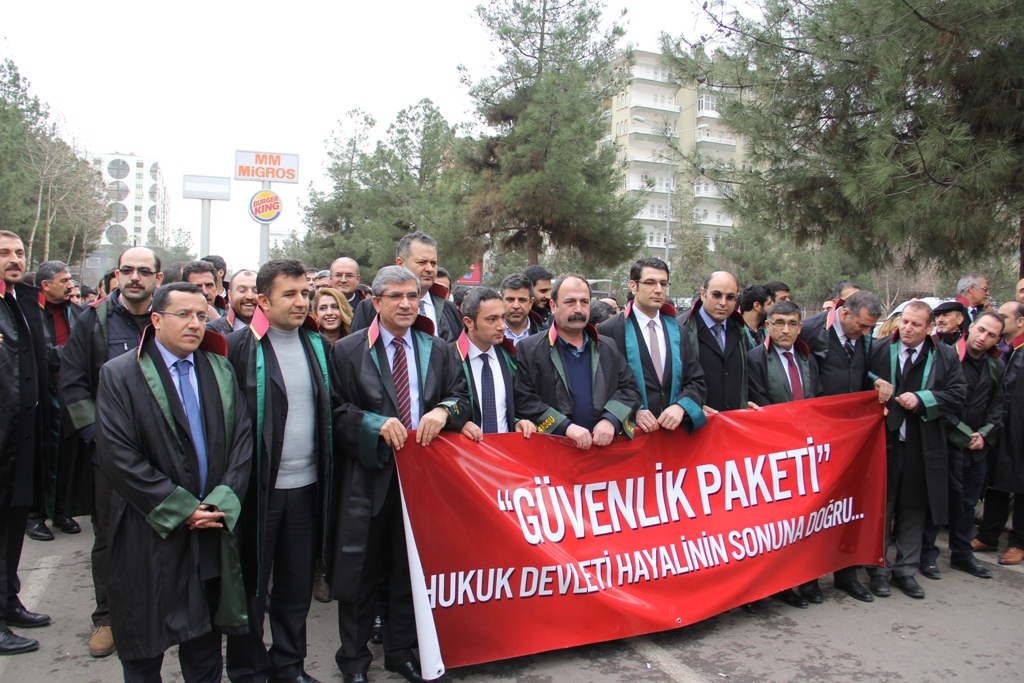