The press release and observation notes from the visit of Kobani

The press release and observation notes from the visit of Kobani

For this purpose, on the same day a meeting was held with Şanlıurfa Governor İzettin KÜÇÜK and District Governor Abdullah ÇİFTÇİ in Suruç. Afterwards there had been a short meeting with HDP (Halkların Demokratik Partisi – Peoples’ Democratic Party) Şanlıurfa deputy İbrahim AYHAN and co-chair of PYD (Partiya Yekîtiya Demokrat - Democratic Union Party)   Asya ABDULLAH in Suruç. 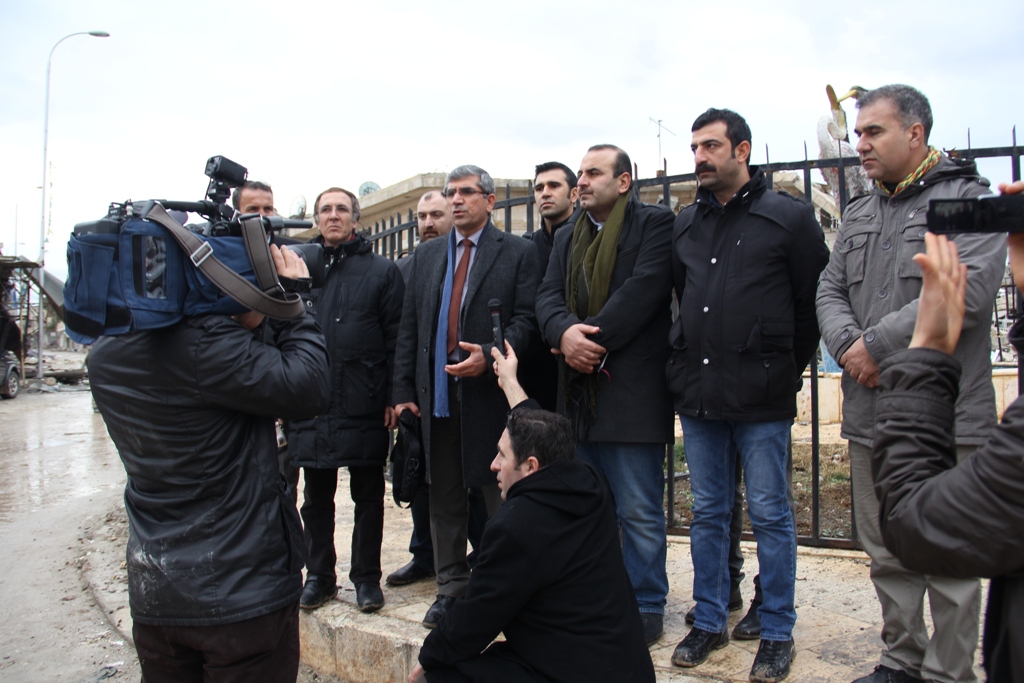 After crossing Mürşitpınar entry point, our committee had been welcomed by Kobani Canton Co-Prime Minister Enver MÜSLİM (a jurist by profession) and the accompanying committee.

Head of Diyarbakır Bar Association Tahir ELÇİ and Canton Prime Minister Enver MÜSLİM jointly gave a press statement to the reporters present at city square. Following the press statement the neighbourhood was visited. During the tour Canton Prime Minister MÜSLİM shared comprehensive information about the war with ISIS gangs and the resistance displayed against them. Our committee observed that despite lack of military vehicles, weaponry and with accompanying shortage of warriors Kurdish fighters waged a chest to chest struggle against ISIS gangs and displayed an unprecedented heroic resistance.

Our committee have observed that all the buildings in the city had been destroyed; city had gone to rack and ruin; there was almost no civil person living in city; there were some unexploded mortar shells and other war wastes in all streets of city; some human corpses laid uncovered on a few streets; water, electricity and other infrastructure services had completely collapsed and in general the city is ceased to be suitable for housing.

President of the People’s Supreme Court of Kobani Ferhan Hacı İSA during the meeting aired his general views about the war took place:

“In this World we have a right that they are craving to breach. It is the right of being a separate people, a nation. Governing ourselves by our own will is our inborn right. Syrian regime and many international bodies deny our right of self-governance to us; they deny the right of having our own will be in the power to us; they deny our right of demanding the recognition of our nation to us. We need to detach ourselves from this approach and from the regime in some way or another. We do not like to be recognised as a part of another entity. We should refuse to be related to another entity. Syrian regime is the Baas regime, an Arabic-Islamic regime. This regime in no way recognizes us as we are. The regime which does not accept us as we are, cannot represent us in the international community.

Our war with ISIS is a result of this refusal to recognition and behind the stage the regimes that refuse to recognise Kurds are the forces that set ISIS on us. After the outbreak of war in Syria we established a self-governing system on our soils. It was a more or less working and self- sufficient mechanism. However Baas-Islamic regime could not tolerate it and made ISIS attack on us. This war was war of ignoring and destroying us. What we desired was enabling Kurdish nation to be sovereign on their own soils. All Kurdish groups outside Syria must let all the world know that this is our will. Kobani should not be regarded as a part of Syrian opposition. We are not within the opposition of Syria. During the preparatory steps of establishing Kobani system other ethnic and religious minorities moved in here and found peace in Kobani. ISIS occupied our 388 villages. Adding villages of Rakka to this figure, 429 of our villages had been occupied by ISIS. They gave us hard times in here. They destroyed all infrastructure of villages to make them uninhabitable. They even filled and closed our the potable water wells. They attacked us to destroy  humanity. They do not care about Islam. ISIS did not only decapitate and abduct our civilians but they also attempted to cut our supply links and make us starve with the aim of finishing us altogether. They attacked us with this purpose. For this reason all Kurds in the world need to be on the alert. We should be on the alert for our rights which wanted to be divested from us with political manoeuvres. Baas regime wants to bury our utopia and free will with our corpses. Our Project of “Peaceful and Pluralistic Cohabitation” has been targeted. Our project should be adopted and developed by all the Kurds. We are in need of every kind of financial support to rebuild Kobani. But the world should support our political will too. ISIS war has been an outstanding victory for us. The share of civilised world cannot be underestimated in this victory. However few they were in number, there were our Turkish brothers fought shoulder to shoulder with us in our fronts against this barbarism and supported our “Humanity Project”. Turkish government to some extent contributed to our victory by closing their eyes to some things within their borders. We cannot deny this favour. We appreciate the meaning and value of it. On the other hand support and protests of Kurds in the North were the biggest support to us.

Eighty percent of the food aid from Turkey made by Kurds in the North. Both North and South Kurds had entirely supported us and never left us alone. This victory does not only belong to us, this is a joint victory of civilized world and all Kurds against barbarism”

President of Kobani Canton and at the same time a jurist by profession Enver MÜSLİM shared his following views with us: “Our people that enforced to emigrate and live in the North after ISIS’ attacks, want to gradually come back. But as it can be seen, living in this city and providing the means of subsistence are almost completely impossible. Rebuilding of the city will take years.  Due to that we primarily want to encamp on our side of the border. We would like to accommodate the first returners and see their urgent needs in this camp. If this camp becomes insufficient we can add a few more camps. But we need the aid of civilised world. We cannot realize these on our resources. We call on international institutions for immediate aid. For this purpose all the Kurds should do their best and seek aid from the international institutions over the countries they live in on behalf of us. The visit of your delegation gladdened us.”

The person who attended some of the meetings and introduced himself as Dozdar Ali (Prosecutor Ali) said that: “there is no need to say too much. Everything is before your eyes. Even a single frame photo you may shoot in here can display, against what kind of enemy and barbarism we fight. Because of that we highly appreciate your visit”

So we left a city behind ourselves, however completely destroyed and uninhabitable, a city that saved the human dignity against barbarism and a city that in need of all kinds of support to rise again through the ashes.

The emigrated civilians who left Kobani due to ISIS attacks and started living in Şanlıurfa (in Turkey) and other close provinces have begun the initiatives of returning to Kobani after it had been cleaned from ISIS gangs, but as Canton Prime Minister mentioned above, currently there are no or rather few convenient buildings for accommodation. It is urgent to set up a temporary camp near the town. In this way, it will be easier for the settlers to join reconstruction works of Kobani.

One of the biggest dangers for civilians who want to go back to Kobani is the risk of mines, unexploded mortar shells and other war wastes. For elimination of these dangerous war wastes there is an urgent need to the help of international organizations and in particular help of specialized companies in the cleaning of landmines and war wastes. On the other hand a modern camp has been set up to contain up to 35.000 people by AFAD (Afet ve Acil Durum Yönetimi Başkanlığı - the Disaster and Emergency Management Presidency) within the borders of neighbour country Turkey. Although the effort of help is highly appreciated, contributing to the establishment of a camp near Kobani must be the priority.

On the other hand for solidarity with Kobani people and reconstructuring Kobani city is a historical responsibility lays with Kurdish people and organizations in our region. It will provide an important contribution and permanent resolution to the problem if every institution stretches a helping hand to a counterpart institution in Kobani, every businessman to a family to rebuild their buildings or every family to a family in rebuilding their homes.

As Diyarbakir Bar Association, we initiate a campaign for investigation of ISIS’ crimes against humanity in Rojava and other areas of Syria; collection of evidence in the field to furnish  in the trials of International Criminal Court (ICC) and participate in them. Within the frame of the work our association will continue to its visits and fact-finding trips to Kobani.

With due respect to public

On behalf of Diyarbakır Bar Association Administrative Board 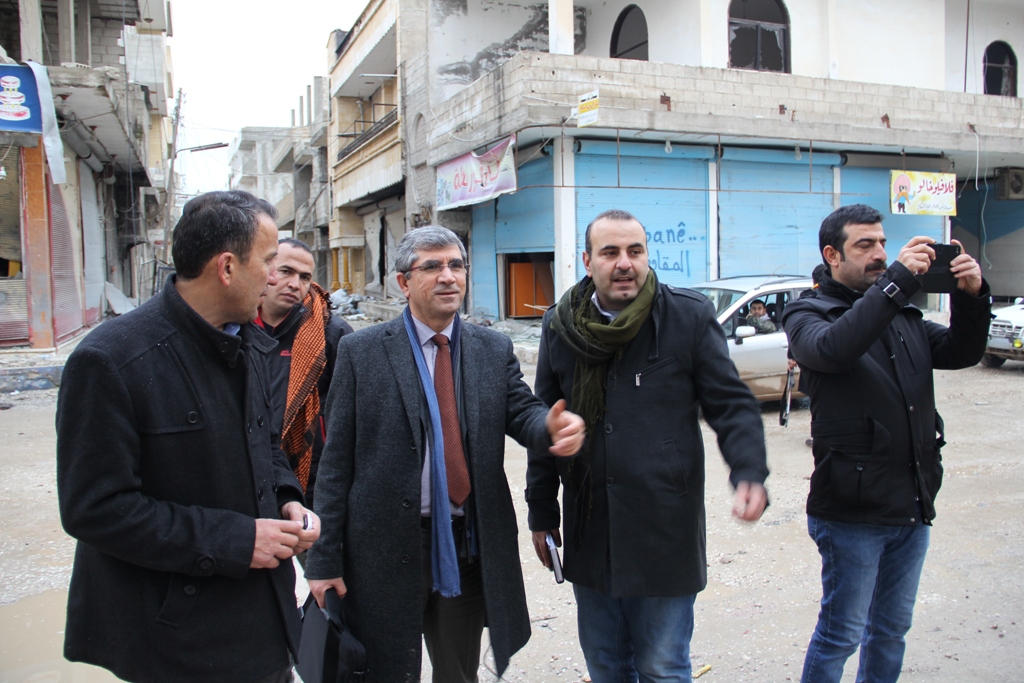